Spring is the perfect season to visit Barcelona. The weather is warm with ideal temperature and the city is full of events. Barcelona is a vibrant city, but during the spring festivals, you can feel a special energy spread over the city. The Sant Jordi day is one of the most popular festivals held on 23rd of April. It’s a celebration of love and books, with a long tradition.

This festival is named after the patron of Catalonia – St. George known as Sant Jordi in Spain. On this day, there are numerous events throughout the city from concerts to book signings. Also, it’s a custom on this day to give a rose as a present to your significant one.

The legend behind Sant Jordi day

We all loved fairytales when we were children. Especially, the part where the knight on a white horse saves the princess and they live happily ever after. The Sant Jordi Day in Catalonia celebrates love and is based on a similar story.

The legend says that a dragon terrorised the small Catalan village of Montblanc. In order to calm the dragon, the inhabitants sacrificed once person a day chosen by drawing lots. However, one day, the king’s daughter was chosen. At the moment when the dragon was about to swallow the princess, a brave knight showed up ready to face the dragon. It was Saint George who is known as Sant Jordi in Catalonia. He killed the evil dragon and from the blood that spurted, a red rose bush grew. So on this day, it’s a custom in Catalonia to give a rose to your loved one.

What to do on Sant Jordi’s day?

The festivities start in the morning on different locations and there’s a wide range of events you can attend.

There is an open day at Barcelona City Hall in the gothic area of Barcelona, at Placa de Sant Jaume. During this day the admission is free and you can visit places inside this building which usually are not open to general public. This includes the amazing “Salo de Cent”, the Gothic gallery, the “Salo de la Reina Regent” and “Salo de Croniques”. At 7:00 PM there is a traditional display of sardana dancing on the square.

On the central square in Barcelona, Placa de Catalunya, the most famous Spanish authors are signing copies of their books. Also, many museums and institutions host special events on this day, including Casa Batllo by Gaudi, whose façade has a decoration inspired by Sant Jordi. You can attend a concert with Spanish artists at Antiga Fabrica d’Estrella Damm.

Barcelona is the capital of Catalonia and the main gateway for arriving in this Spanish state. The main airport is the Barcelona El Prat Airport, located 20-30 minutes from Barcelona city centre.

The metro line L9 Sud will take you to Zona Universitaria station, while the R2 train line runs to Passeig de Gràcia Station. The express buses Aerobus 1 and Aerobus 2, as well as, regular local bus lines serve the airport during the day, while the night buses take over after midnight.

For fast and reliable transfers from El Prat Airport, you can book a private Barcelona airport transfer at a fixed price. 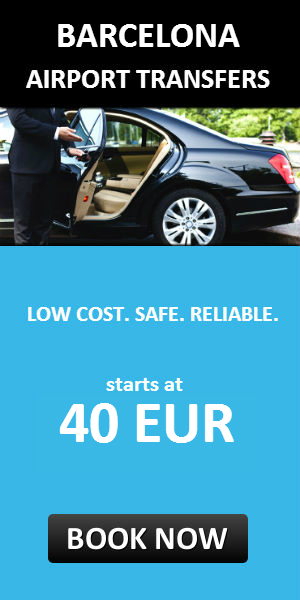