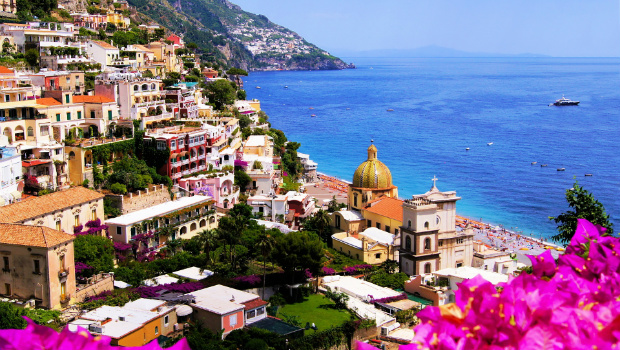 Amalfi Coast is a fine example of a Mediterranean seaside. Charming and seductive, it will capture its visitor’s heart instantly. Once you arrive there, you won’t be able to settle in one place. The coastline features one of the most beautiful Italian towns and villages, so make sure to put as many places in your itinerary as possible.

The nearest international airport is Naples which is the main hub for arriving in Amalfi region. There are regular train lines to the larger cities and bus links to every city. You can plan the whole trip in advance and book private Naples taxi to Amalfi Coast.

Whether you’re an explorer or just want to enjoy the sun on one of the beaches, Amalfi Coast has it all. We picked the top places which should be on your travel itinerary.

If you’re looking for a nice beach to relax, you won’t find it in Sorrento. The town sits on the cliffs and overlooking the sea to Mountain Vesuvius and Naples. However, this beautiful Italian city will enchant you with its magnificent landscape and majestic panoramic views. In addition, there is a wide range of old shops selling the finest ceramics and lacework, so you won’t leave empty-handed, for sure.

Its central position on the Amalfi Coast makes it a good base for exploring the nearby towns. On the south of Sorrento lies the scenic countryside, while the Pompeii and archaeological sites are the north from the city. Naples airport is the main arrival point and you can easily get to Sorrento by train or book a private Naples airport transfer.

Amalfi is a perfect combination of history and beauty. This charming city on the Amalfi Coast is a popular summer destination with important historical heritage. Amalfi was a major trading centre in the past and is known for its exceptional medieval architecture. The most important landmark is the Cathedral of St. Andrea which dates back to the 11th century. It is known for its ceiling paintings and the statue of St. Andrea by Michelangelo. As Amalfi was famous in the past for papermaking, you can’t miss the Museum of Handmade paper.

Amalfi town is on the railway route from Naples along the coast, so it’s fairly easy to get from Naples. For a faster and reliable transfer, you can book a private Naples taxi.

Today’s Pompeii is a testament to one of the greatest natural disasters in human history. In 79 AD, Mount Vesuvius erupted and wiped the whole city. Underneath the thick layer of dust, for centuries lied the intact city which was discovered in 1748 by a group of explorers. This archaeological site is of great importance as it provides an insight into everyday life in the Roman era.

Pompeii is easily accessible from the nearby cities, as well as, Naples and we suggest you book a private tour in order to get to know the city better in a day.

Salerno has had many ups and falls during its existence. The most glorious days were during Norman settlement when the city became even richer than Rome. It became the home of the most renowned medical school at that time “La Scuola Medica Salernitana” which is considered to be the origin of the modern university. Today, Sorrento has implemented several urban development programs mainly focused on the historic city centre. It is a real pleasure to wander around in the tiny alleys and passages. The promenade is another thing Salerno is especially proud of, as well as, the new ferry terminal designed by Zaha Hadid.

Salerno is only 60 km from Naples and you can get by car in an hour. There are regular trains to the city or you can book a Naples airport transfer online prior to your arrival.

Positano is a picture-postcard town with houses falling down to the sea in a cascade of beautiful colours. It became popular in the mid-1950s and it rivalled the high-end destination for the celebrities – Capri. Even today it still has a reputation for a fashionable and chic town. You can feel the southern-Italian holiday atmosphere while enjoying on the beautiful beaches and eating pizza. The most visited, glamorous beaches in Positano are Laurito, Arienza and Fornillo Beach.

Capri is the jewel of the Amalfi coast, the most sought-after destination for centuries. With its fabled beauty and hedonistic lifestyle, it attracted Roman emperors, royals, and Hollywood celebrities over the decades. The historical heritage blends perfectly into the modern appeal of the island, creating a unique beauty. It’s especially popular for day trips, but you should expect prices higher than average, so keep this in mind when planning the budget.

Capri can be reached only by sea and there are regular ferry lines from Naples and Sorrento throughout the year. Once you arrive at Naples airport, you can take a taxi to the Molo Beverello or the Calata Porta di Massa port and get on the ferry to Capri.